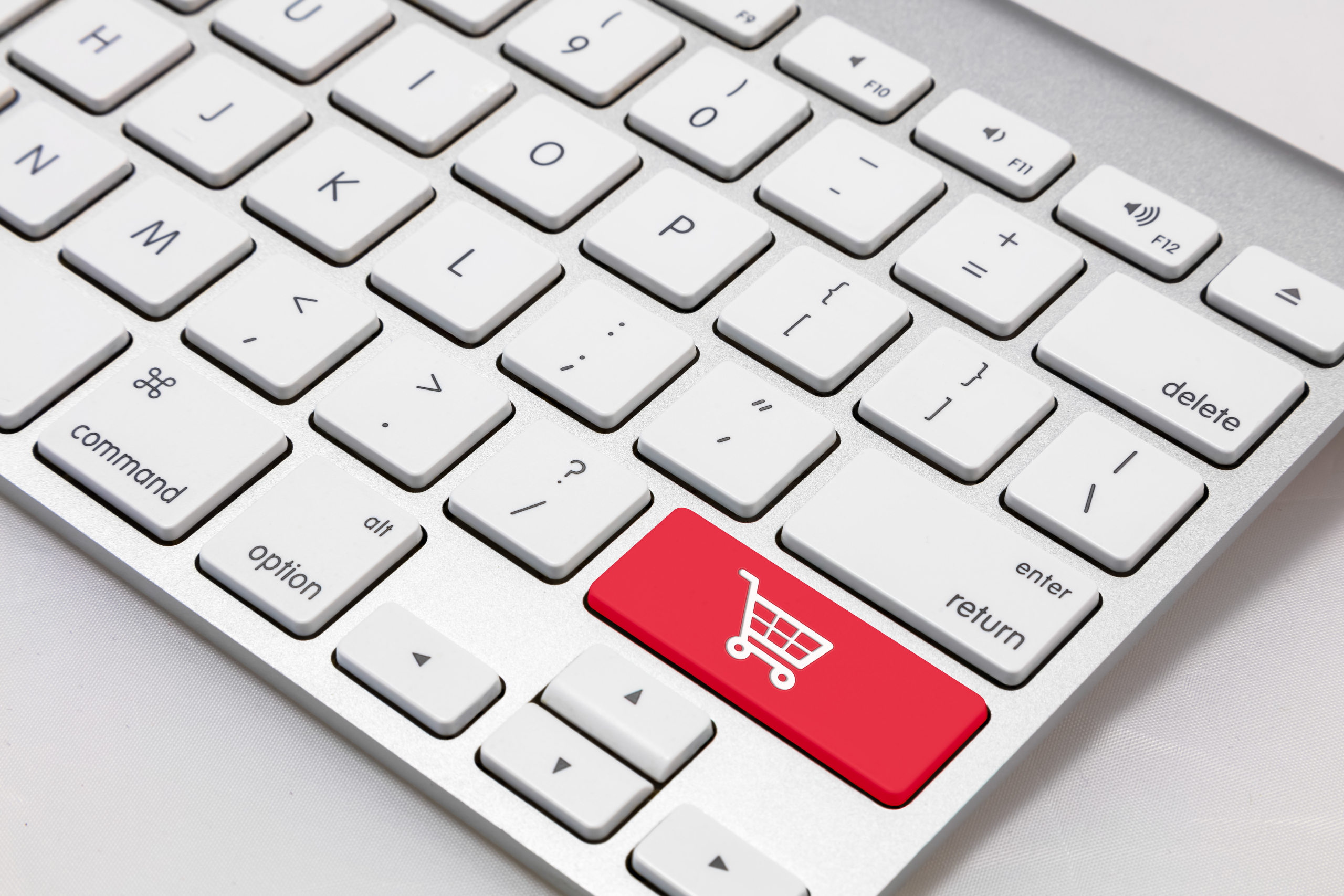 5 Answers to 5 Big Questions About CTAs

CTA buttons are a fascinating topic. Everyone has a rule or two about them, and they cling to them religiously. But some of those rules are myths, outdated, or just wrong. Even so, every rule has an exception, and those exceptions can be used to good effect if used with sound, strategic intent.

What’s a marketer to do?

Let’s dive in and see if we can gain some clarity. For the purposes of discussion, let’s break it down based on five key questions:

What Color Should a CTA Be?

Myth Buster Alert: There is no universal best color for a CTA

There was a time when the acronym “BOB” ruled the CTA world. Short for Big Orange Button, it was the go-to button color. Unbounce even declared it so in 2009. Time has moderated this simplistic point of view, however.

In more recent times, there has been the Red vs. Green debate. Numerous studies have, in fact that red will generally outperform green. One notable test by Hubspot showed a 21% boost in performance using a red button.  Others have duplicated those results.

Does that mean we should all change to red CTA buttons? No!  There is no justification for a universal color.  Sure, red works, orange works, even green works.  Does white work? After all, what’s as passive and innocuous as white? Right? Well, look at the example below: 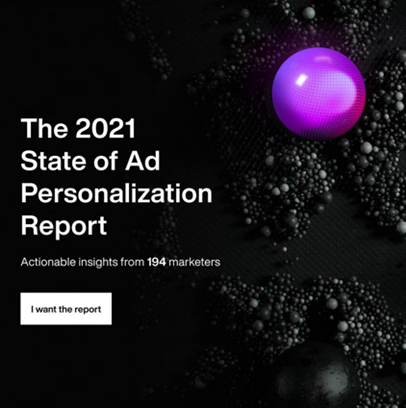 Even lacking actual response data from this paid social ad, it can be argued that this execution works well. It worked on me. I got the report. The CTA pops off the screen. In this case, it’s all about the contrast, and that’s the driving factor in these considerations. If you’re an environmental company with green as the dominant color in your brand color palette, would you want to use green CTAs? You want to create contrast, a presentation that demands attention and signals that action is needed. In addition, a plentiful amount of white space around the button helps set it off and get it noticed. Don’t crowd your CTA!

The final point here is that CTA color is crucial, but dogma is dangerous. Consider your brand palette and find the most contrasting color that doesn’t violate your brand standards. You don’t want people to miss it, so make it stand out with contrast. Of course, even within a universe of acceptable options, test, test, test.

What Should It Say?

When it comes to copy considerations for CTAs, it never hurts to remind ourselves that the operative word in the acronym, CTA, is action. And so, we stay focused on that. Powerful, active verbs that compel the reader to perform a desired action are best. Instead of weaker words like “enter” and “submit,” choose more action-packed words like “get,” “reserve,” and “try.”

Use a verb to instigate the reader’s action. The CTA needs to draw their attention with power words such as “Try free,” “Read more,” “Ask for your trial,” “Get your discount,” and “Buy now.”

Make it imperative.  For instance, compare these two call-to-action phrases:

Which one pushes you to act? The second one, of course. First of all, it’s never good to ask a question in any kind of copy where you present the reader with the option of responding, “No,” and giving them permission to move on. “Subscribe Now!” works because the phrase is definitive and authoritative. It tells the reader exactly what to do.

Urgency/FOMO. Creating a sense of urgency to act is essential. People will put off making decisions or making commitments if you give them any way to avoid it. Make sure your reader knows that the time to act is now with messages like “Get your limited time offer” or “Order while supplies last.” If you have a free offer, make sure you put that magic word, “free,” in the CTA. It’s the most powerful word in the English language.

Brevity and simplicity. Don’t try to pack an additional selling message in the CTA. They aren’t for selling. They’re for compelling action to the next step in the sales process. A CTA shares the golden rule of brevity with a lot of different media, especially out-of-home. A good rule of thumb is to keep your CTA between two and five words, although, like all rules, it can be broken when it serves your purposes.

Relevance. Make sure your CTA is abundantly clear about what you want the reader to do. If you’re asking the reader to download a white paper, be clear about that. Also, it’s important to make your CTA relevant to where they are in the sales funnel. The first message in most B2B buying environments shouldn’t be “Buy Now.” Likewise, if you’re writing a CTA for a retargeting ad, don’t act like you’ve never “met.” Nudge them to the next step in the process with something like, “Set up your demo.”

Identify the audience’s desires. What would motivate them to follow through on your ad or look at your content in the first place? Connect your CTA to fulfilling those desires. Craft your message in a way that speaks to them. Use words that inspire enthusiasm. Instead of “Schedule your property tour now,” try “Find your dream home today.”

Could it be any clearer? What does ContentCal want you to do? Answer: Register for this event. Bonus points for setting it up with FREE. 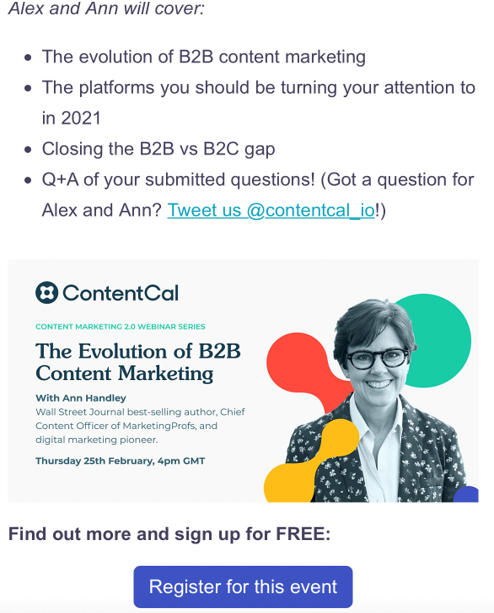 What shape should it be?

A quick note on shape. A rectangular shape has pretty much become an expected norm, and so you want to be careful not to stray so far afield from what people expect a CTA to look like that your response rates are suppressed. The consensus is that a CTA should look like a button. A drop shadow or a dimensional effect can help with that. In addition, the larger they are, the better, especially in the mobile environment.

Even in the context of the rectangular convention, there are some things to consider.  Specifically, there is the question of sharp or rounded corners. You might say this is a pretty insignificant “inside baseball” question for digital marketing nerds, but there is some data to consider here.

Marketing expert and best-selling author of a number of digital marketing books, Bryan Eisenberg has some interesting thoughts about CTA shape. He states that studies show that buttons feature rounded corners and buttons that combine sharp and round corners can be effective because their difference gets them noticed. Because of this, Eisenberg also says we shouldn’t be afraid to experiment and test other shapes. Some practitioners have had success with this innovative approach.

Here’s an example of buttons that are perfectly branded and easy to ignore. 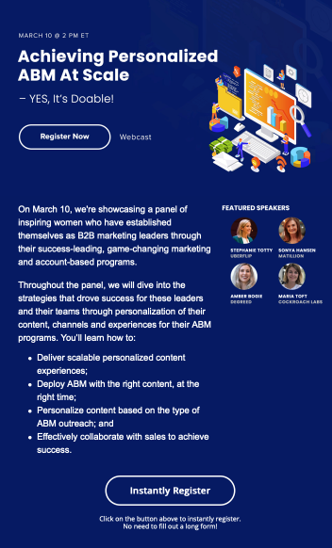 Where To Put the CTA?

The CTA has to be above the fold. That’s another myth that is in the process of being busted. However, there is some discussion about it. I am guilty of promoting this idea, and I stand corrected. Intuitively, you can say that having it above the fold is wise because that’s what you want visitors to view and act upon. Research by Jakob Nielsen has shown definitively that only 20% of people read below the fold. Ergo, the CTA should be above the fold.

Not so fast. Neil Patel, a respected expert on numerous web marketing topics interprets that a bit differently and asserts that below the fold is a red herring and doesn’t have an effect on conversion rates.  His view is that the button needs to be below the right amount of copy in your message. In other words, the ideal location for the CTA should be below or adjacent to the point where you think you’ve got your prospect hooked. If your visitors are somewhat pre-sold, maybe above the fold is best. your selling story needs a little explaining down the page will generate the best results.

Pond5 offers an example that positions the CTA right after pitch is made. A CTA at the top would ask the reader to hunt for it.

What should we be testing?

In short, test everything. Colors. Shapes. Sizes. Messages. Location. But don’t test everything at once. You need to isolate testing variables in order to ascertain the cause and effect. That means you should adopt a long-term testing mentality that drives continual improvement in your results. Eisenberg also notes that he had a client who tested a button saying, “Buy Now” versus “Add to Cart.” “Buy Now” increased conversions, but “Add to Cart” increased average order values. An interesting distinction.  If you think about it, it makes sense because shoppers who click on “Add to cart” don’t feel pressured to make a buying commitment. They’ve only made a commitment of interest, and when they come back later, more on their own terms, they are more inclined to react to new offers and upselling. This is an insight to keep in mind when reviewing campaign analytics.

That’s a lot to consider. Like most things in digital marketing, best practices with CTAs are up for debate and subject to change. The main thing is to keep learning and getting smarter every day. 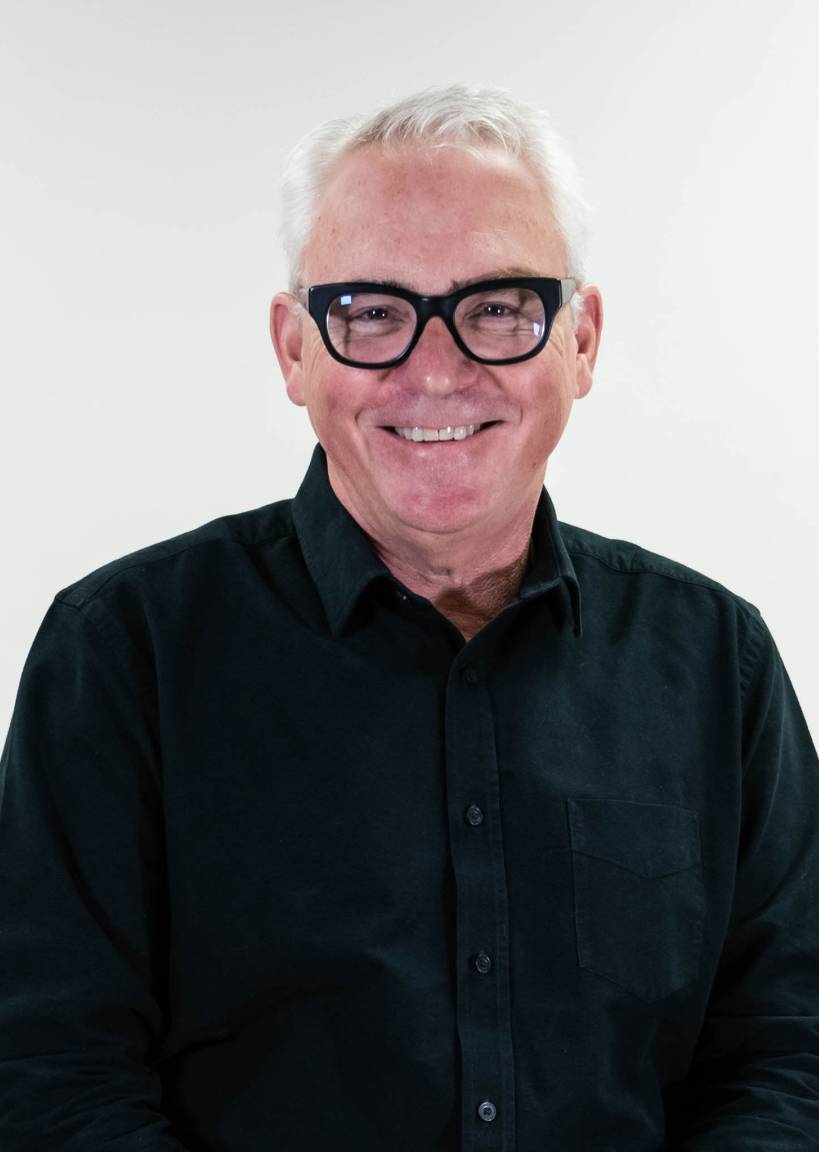 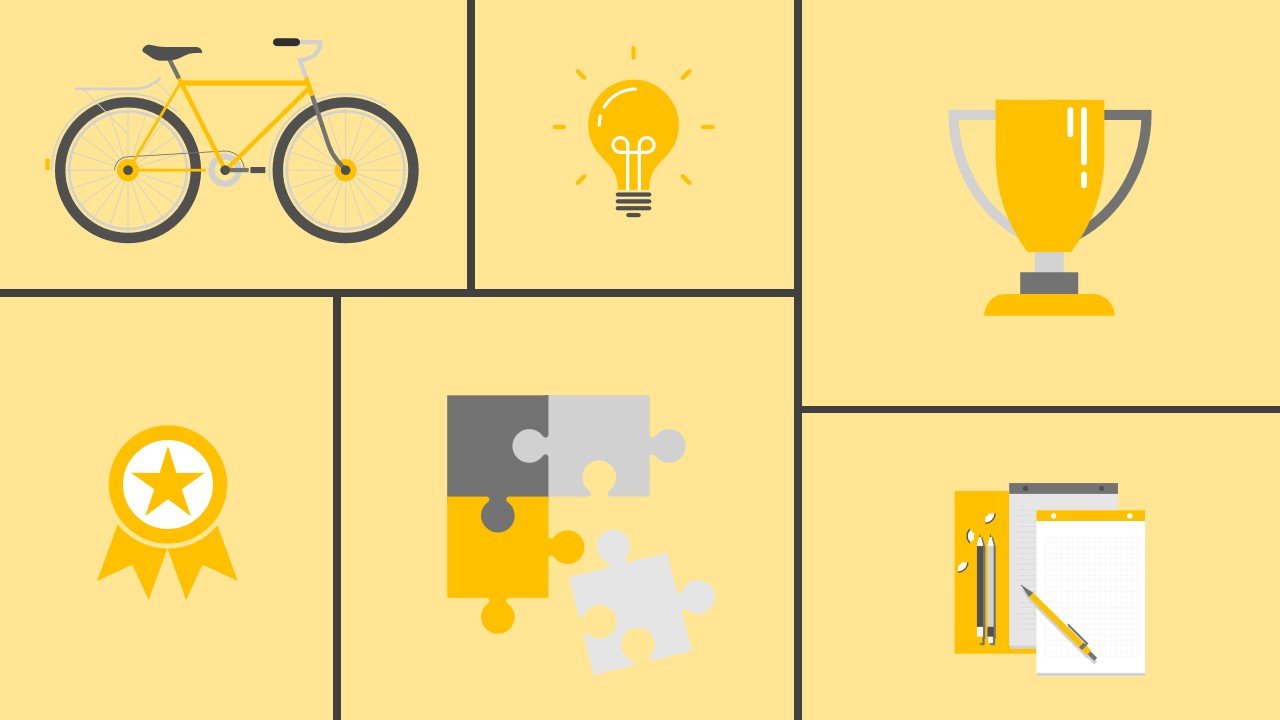 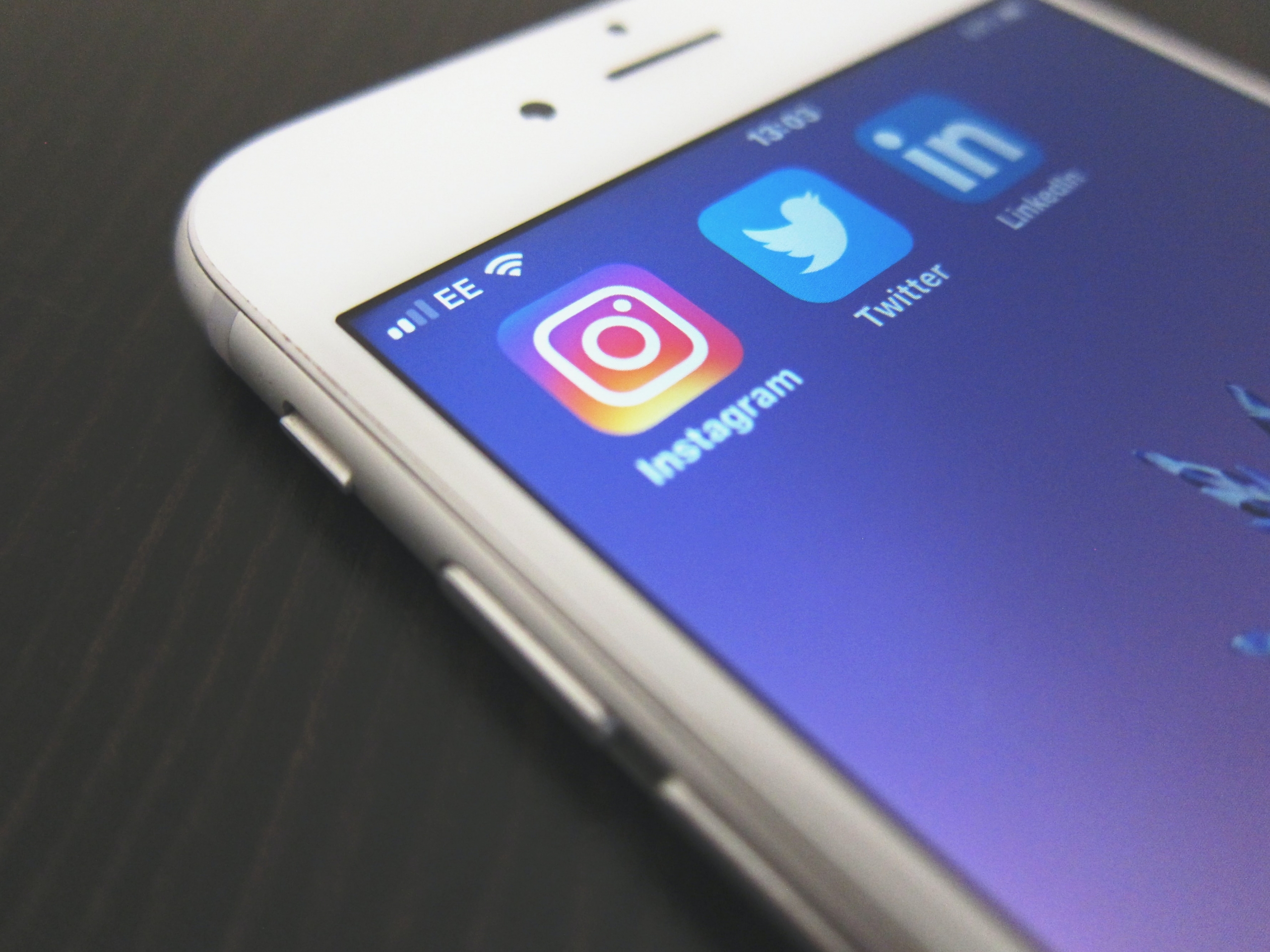 Organic Social vs. Paid Social, Which is Right For My Brand? 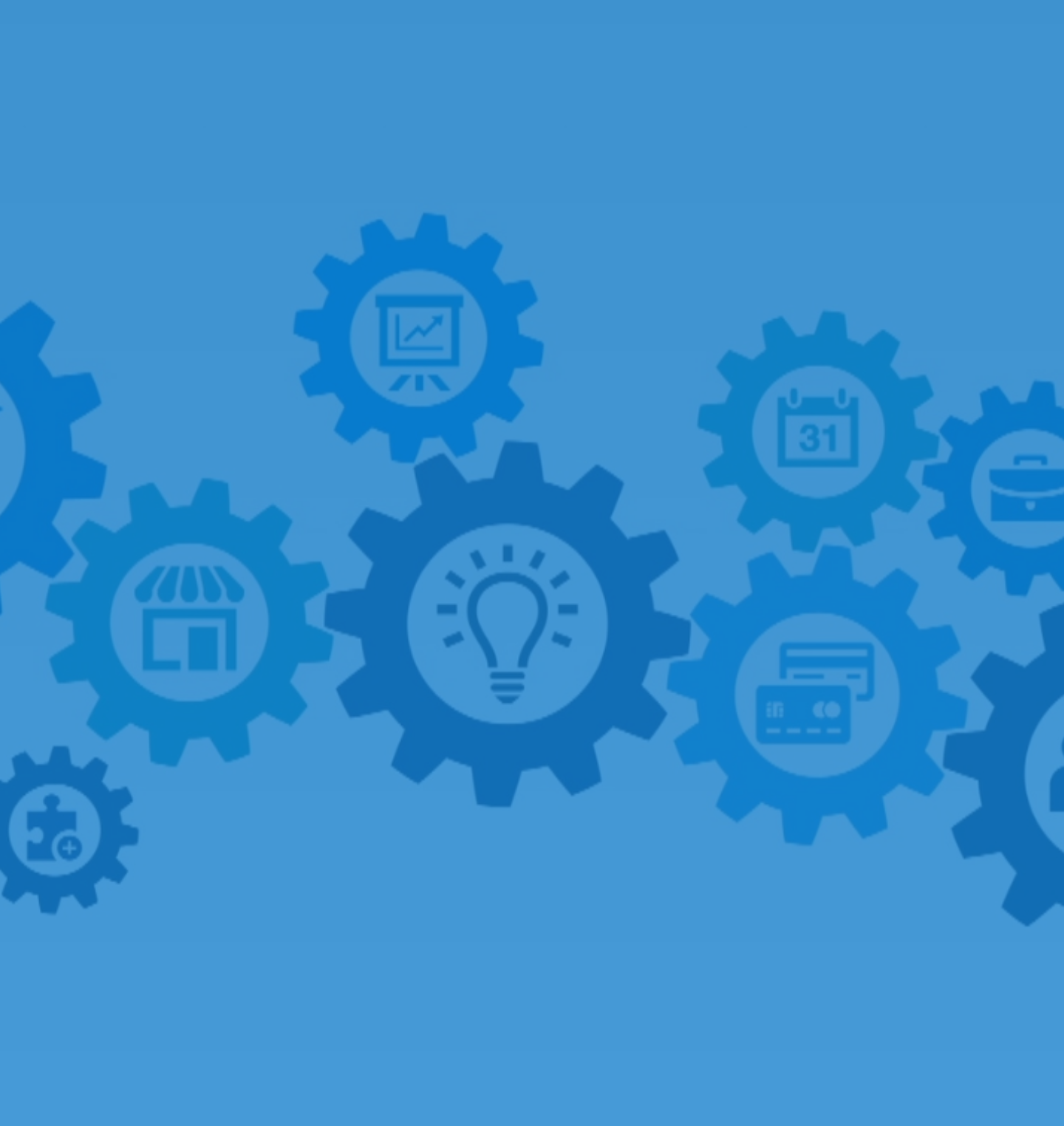 Customer Journey Interruption: How to increase performance results in a challenging environment